TRIP PLANNER GETTING INTO BHUTAN

The way to Bhutan: Travel by Land and Travel by Air.

The Kingdom of Bhutan remained largely cut off from the rest of the world up until the early 1960’s. Entering the country was difficult as it was only accessible by foot from two main entry points, one in the North and another from the South. The Northern route was through Tibet, crossing high mountain passes that were inaccessible throughout the winters.   The second entry route from the South came through the plains of Assam and West Bengal. The high, frozen passes in the North and the dense, jungles in the South made it extremely difficult to enter the country. 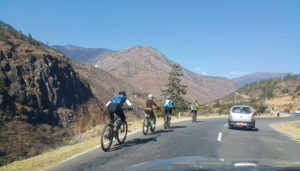 However, carefully planned economic development has made the country much more accessible and there are now a network roads entering and traversing the country, as well as one international and multiple domestic airports.

Today the main roads entering the country are through Phuentsholing in the south, linking Bhutan with the Indian plains of West Bengal, through the border towns of Gelephu, in the central region and Samdrup Jongkhar, in the east, that link with the Indian state of Assam.

All visitors to Bhutan require a visa to enter the country (see visa under the plan tab).  Visa clearance must be obtained before coming to Bhutan and travel must be booked through a Bhutanese tour operator or international partner.  Indian, Bangladeshis and Maldivian nationals can receive a visa on entry and it is not necessary for them to book travel through a tour operator, however it is recommended.  In the case of Indian nationals a passport or voters card are acceptable on entry.