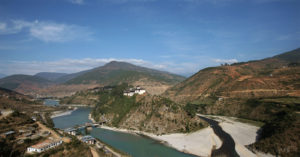 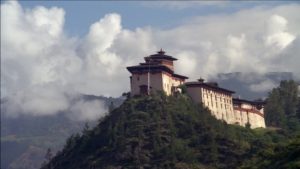 Wangduephodrang is one of the largest dzongkhags (districts) in the country. As the district covers 4,308 sq km and ranges from 800-5800 m in altitude it has extremely varied climatic conditions ranging from Sub-Tropical forests in the south to cool and snowy regions in the north.
Festivals

One of the most notable sites in the district is Phobjikha Valley. This valley is the habitat of rare and endangered Black Necked Cranes that roost there during their annual migrations. The residents of the valley have garnered much acclaim for their conservation efforts to preserve the habitat of these beautiful birds. Every year the Black Necked Crane Festival is held in Phobjikha in order to protect and spread awareness of the cranes. The Festival includes songs, masked dances and plays by the local school children. This event is one of the most unique and popular festivals in the country.

Wangduephodrang district has a rich tapestry of ancient Buddhist temples and monasteries that is sure to enrapture any visitor. The following are a few of the most notable religious sites:

Gangtey Monastery: Situated atop a hill at an altitude of 2800m, Gangtey Monaster (also known as Gangtey Sanga Choeling Goemba) offers a stunning view of Phobjikha valley, winter home to the rare Black Necked Cranes. This venerable monastery was founded in 1613 by Je Kuenga Gyaltshen.

Dargay Goempa: This monastery was built in the spot where Divine Madman Drukpa Kuenley first met Ashi Genzo who was renowned for her beauty. When it was first constructed the monastery was a simple Drubdey or meditation center. Lam Drukpa Kuenley is widely considered to be Bhutan’s favourite and most iconic saint due to his unorthodox method of teaching through ribald humor. 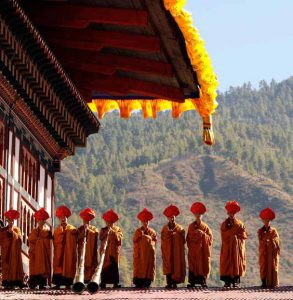 With its diverse climates and rich natural resources Wangdue Dzongkhag is home to many rare and exotic animals like Red Pandas, Tigers and Leopards. There are also large numbers of rare birds such as the Black Necked Crane, White-Bellied Heron and the Spotted Eagle.

WANGDUEPHODRANG TSHECHU
Wangduephodrang in central Bhutan is famous for Lozeys or Ornamental Speeches. Two notable lozeys are the tragic song of Gaylong Sumdar Tashi that of Pema Tshewang Tashi who served as an official at the Dzong. The Dzong served as the administrative centre and was built in 1639 by Zhabdrung Ngawang Namgyel at the confluence of Puna Tsang Chu.
The annual Wangduephodrang Tshechu was introduced by Zhabdrung Ngawang Namgyal after the completion of the dzong. The three-day annual Tshechu is attended by people from Punakha and Thimphu and provides the people with an occasion for merrymaking and revelry. The Tshechu is known for the Raksha Mangcham or the Dance of the Ox. It concludes with the unfurling of the Guru Tshengye Thongdrol where people throng to receive blessings.

Note: Wangduephodrang Dzongkhag Dzong was burnt to the ground on the 24th of June 2012. Plans are well underway to re-build. While the Tshechu will take place, please confirm with your tour operator the location. After the fire the Tshechu was held at the nearby Tencholing Army ground in Wangduephodrang.