Punakha Dzongkhag has been inextricably linked with momentous occasions in Bhutanese history. It served as the capital of the country from 1637 to 1907 and the first national assembly was hosted here in 1953. It is the second oldest and second largest dzong in Bhutan and one of the most majestic structures in the country.
On October 13, 2011, the wedding of the King of Bhutan, Jigme Khesar Namgyel Wangchuck, and his fiancé, Jetsun Pema, was held at the Punakha Dzong.

Punakha valley has a pleasant climate with warm winters and hot summers. It is located at an average elevation of 1200 meters above sea level. Owing to the favorable climatic conditions, rice grows very well in this region and is the main cash crop cultivated here.

Two major rivers in Bhutan the Pho Chhu and Mo Chhu converge in this valley. Punakha Dzong is built at the confluence of these two rivers and is an especially beautiful sight on sunny days with sunlight reflecting off the water onto its white-washed walls.

In addition to its structural beauty, Punakha Dzong is notable for containing the preserved remains of Zhabdrung Ngawang Namgyal, the unifer of Bhutan as well as a sacred relic known as the Ranjung Karsapani. This relic is a self-created image of Avalokiteswara that miraculously emerged from the vertebrae of Tsangpa Gyarey the founder of the Drukpa School when he was cremated. 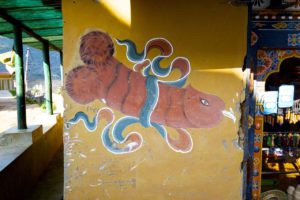 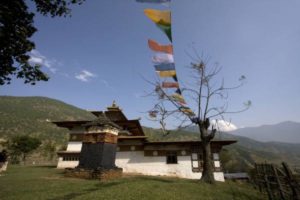 Chimi Lhakhang, also known as Chime Lhakhang or Monastery or temple, is a Buddhist monastery in Punakha. Located near Lobeysa, it stands on a round hillock and was built in 1499 by the 14th Drukpa hierarch, Ngawang Choegyel, after the site was blessed by the “Divine Madman” the maverick saint Drukpa Kuneley (1455–1529) who built a Chorten on the site.

In founding the site it is said that Lama Kunley subdued a demon of Dochu La with his “magic thunderbolt of wisdom” and trapped it in a rock at the location close to where the chorten now stands. He was known as the “Mad Saint” or “Divine Madman” for his unorthodox ways of teaching Buddhism by singing, humour and outrageous behaviour, which amounted to being bizarre, shocking and with sexual overtones. He is also the saint who advocated the use of phallus symbols as paintings on walls and as flying carved wooden phalluses on house tops at four corners of the eaves. The monastery is the repository of the original wooden symbol of phallus that Kunley brought from Tibet. This wooden phallus is decorated with a silver handle and is used to bless people who visit the monastery on pilgrimage, particularly women seeking blessings to beget children. The tradition at the monastery is to strike pilgrims on the head with a 10-inch (25 cm) wooden phallus (erect penis). Traditionally symbols of an erect penis in Bhutan have been intended to drive away the evil eye and malicious gossip. 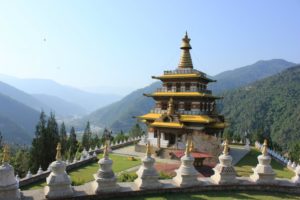 Standing regally on the hill above the Punakha valley, Khamsum Yulley Namgyal Chorten is a classic example of gorgeous traditions and architecture of Asian country. This chorten, however, is unique. It is not designed for community worship or for monastic retreat or education like other Buddhist Institute and Colleges. It is designed as a magical tool. It was built by the Queen Mother for heading off the negative forces and transporting  peace and harmony for all the living beings. The thing that sets this Chorten apart is that it was designed on the principals delineate within the Holy Scriptures instead of trendy engineering manuals. The golden spire and labyrinthine wall patterns square measure fine example of art and traditions of Asian country. 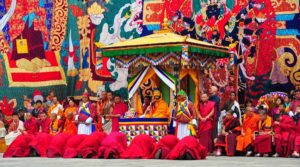 PUNAKHA TSHECHU AND DRUBCHEN
Punakha is located in the western part of Bhutan is the winter home of the Je Khenpo, the Chief Abbot of Bhutan. Punakha has been of critical importance since the time of Zhabdrung Ngawang Namgyel in 17th century.
Zhabdrung Ngawang Namgyal is known as the unifier of Bhutan as a nation state and he was the one who gave Bhutan and its people the distinct cultural identity that identified Bhutan from the rest of the world.

During 17th century Bhutan was invaded several times by Tibetan forces seeking to seize a very precious relic, the Ranjung Kharsapani. Zhabdrung Ngawang Namgyal led the Bhutanese to victory over the Tibetans and to commemorate the triumph he introduced the Punakha Drubchen. Since then Punakha Drubchen (also known as Puna Drubchen) became the annual festival of Punakha Dzongkhag.

The Punakha Drubchen is a unique festival because it hosts a dramatic recreation of the scene from the 17th century battle with Tibetan army. The ‘pazaps’ or local militia men, dress in traditional battle gear and reenact the ancient battle scene. This reenactment harkens back to the time when in the absence of a standing army, men from the eight Tshogchens or great village blocks of Thimphu came forward and managed to expel the invading forces from the country. Their victory ushered in a period of new-found internal peace and stability.

In 2005 another festival known as Punakha Tshechu was introduced by the 70th Je Khenpo Trulku Jigme Choedra and the then Home Minister His Excellency Lyonpo Jigme Yoedzer Thinley. The Tshechu was introduced in response to the requests made by Punakha District Administration and local peopleto host a Tshechu in order to better preserve Buddhist teachings and keep alive the noble deeds of Zhabdrung Rimpoche.

These two festivals not only play an important role in preserving Bhutan’s rich culture and traditions but also provide devout Buddhists with an opportunity for prayer and pilgrimage. They reflect the richness of the Bhutanese cultural heritage and are very special in the eyes and hearts of both Bhutanese and tourists who visit Bhutan.