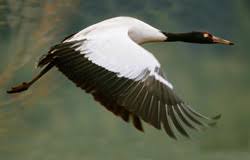 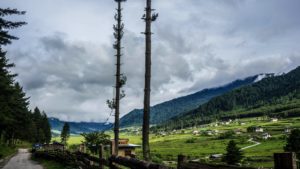 Phobjikha is a bowl-shaped glacial valley on the western slopes of the Black Mountains, bordering the Jigme Singye Wangchuck National Park. Because of the large flock of black-necked cranes that winters here, it is one of the most important wildlife preserves in the country. In addition to the cranes there are also muntjacs (barking deer), wild boars, sambars, serows, Himalayan black bears, leopards and red foxes in the surrounding hills. The Nakey Chhu drains the marshy valley, eventually flowing into the lower reaches of the Punak Tsang Chhu. Some people refer to this entire region as Gangte (or Gangtey), after the goemba that sits on a ridge above the valley. 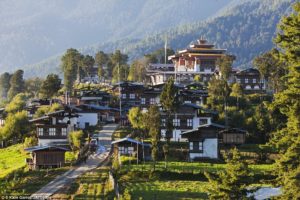 Gangte Goemba enjoys the valley’s prime real estate, on a forested hill overlooking the green expanse of the entire Phobjikha valley. The extensive complex consists of the central goemba, monks’ quarters, a small guesthouse and outlying meditation centres. Much of the interior and exterior woodwork of the 450-year-old goemba was replaced between 2001 and 2008 due to a beetle-larvae infestation.

During a visit to the Phobjikha valley, the 15th-century treasure-finder Pema Lingpa prophesied that a goemba named gang-teng (hilltop) would be built on this site and that his teachings would spread from here. Pema Thinley, the grandson and reincarnation of Pema Lingpa, built a Nyingma temple here in 1613, and the larger goemba was built by the second reincarnation, Tenzing Legpey Dhendup. The current Gangte trulku (reincarnation), Kunzang Pema Namgyal, is the ninth reincarnation of the ‘body’ of Pema Lingpa.

The tshokhang (prayer hall) is built in the Tibetan style with 18 great pillars around an unusual three-storey inner atrium, and is one of the largest in Bhutan. The inner sanctum houses the funeral chorten of founder Tenzing Legpey Dhendup. The monastery’s three-day tsechu (September/October) ends with the hanging of a large thondrol on the final day; at other times the huge thangka (painted or embroidered religious picture) is stored in a steel box in the inner sanctum.

Upstairs is the central funeral chorten of the sixth Gangte trulku. Monks will tell you how on his death the lama’s body shrank down to the size of a baby and then the size of a peanut.

The long white building on the hill to the north of the goemba is Kuenzang Choelling, a shedra (Buddhist college) that’s home to 300 student monks.