This commanding dzong ( Fortress ), high above the roaring Mangde Chhu, is perhaps the most spectacularly sited dzong in Bhutan, with a sheer drop to the south that often just disappears into cloud and mist. The rambling assemblage of buildings that comprises the dzong trails down the ridge and is connected by a succession of alley-like corridors, wide stone stairs and beautiful paved courtyards. The southernmost part of the dzong, Chorten Lhakhang, is the location of the first hermitage, built in 1543.

The first construction on the site was carried out by Ngagi Wangchuck (1517–54), the great-grandfather of Zhabdrung Ngawang Namgyal. He came to Trongsa in 1541 and built a tshamkhang (small meditation room) after discovering self-manifested hoof prints belonging to the horse of the protector deity Pelden Lhamo. Trongsa (‘New Village’ in the local dialect) gets its name from the retreats, temples and hermit residences that soon grew up around the chapel. The dzong was built in its present form in 1644 by Chhogyel Mingyur Tenpa, the official who was sent by the Zhabdrung to bring eastern Bhutan under central control. It was then enlarged at the end of the 17th century by the desi, Tenzin Rabgye. Its official name is Chhoekhor Raptentse Dzong, and it is also known by its short name of Choetse Dzong. The dzong was severely damaged in the 1897 earthquake, and repairs were carried out by the penlop of Trongsa, Jigme Namgyal, father of Bhutan’s first king.

Trongsa Dzong is closely connected to the royal family. The first two hereditary kings ruled from this dzong, and tradition still dictates that the crown prince serve as Trongsa penlop before acceding to the throne.

The dzong’s strategic location gave it great power over this part of the country. The only trail between eastern and western Bhutan still leads straight through Trongsa and used to run directly through the dzong itself. This gave the Trongsa penlop enviable control over east–west trade and the considerable tax revenue to be derived from it. Today most visitors enter through the main eastern gate, but energetic types can make the steep cardio hike on the Mangdue Foot Trail from the viewpoint and enter the dzong via the western gate, in traditional fashion.

There are 23 separate lhakhangs in the dzong, though what you get to see depends on which keys are available. Most of the existing fine decoration was designed during the rule of the first king, Ugyen Wangchuck.

Rooms to visit include the atmospheric northern assembly hall and the southern Mithrub Lhakhang, which houses the funerary chorten of the founder, Ngagi Wangchuck. Feel for the footprints worn into the wooden floor by one overly enthusiastic prostrator.

The five-day Trongsa tsechu is held in the northern courtyard in December or January and culminates in the unveiling of a large thongdrol (a giant thangka – a painted or embroidered religious picture). To the side of the dzong is the archery ground and pavilion where the current king (then crown prince) was crowned penlop in 2004. 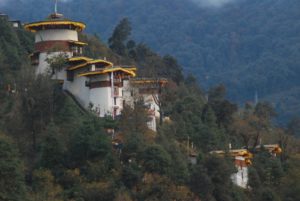 This watchtower, which once guarded Trongsa Dzong from internal rebellion, stands on a promontory above the town. It was built by Chogyal Minjur Tempa, the 1st Governor of Trongsa in 1652. It has four observation points resembling Tiger, Lion, Garuda, and Dragon. Climb up the path to visit Ta Dzong which now houses a shrine dedicated to the epic hero, King Gesar of Ling. A visit to this former watchtower provides visitors with an insight into the significance of Trongsa in Bhutan’s history. It is now converted to Museum. As of date the Ta Dzong of Trongsa is the most fascinating museum of the nation.