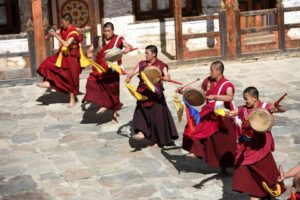 This region that spans from 2,600-4,500m is the religious heartland of the nation and home to some of its oldest Buddhist temples and monasteries. Tales of Guru Padmasambhava and the tertons (“religious treasure-discoverers”) still linger in this sacred region.
Bumthang Dzongkhag consists of four main valleys Ura, Chumey, Tang and Choekhor. Choekhor is the largest of the four mountain valleys and is widely considered as ‘Bumthang Valley’. The valleys are broad and gentle carved by the ancient glaciers. The wide and scenic valleys draw a large number of tourists each year.

The name Bumthang has two probable origins; the first is that it is named after a Bumpa, a vessel for holy water which the valley resembles in shape. The second origin implies that it is the Valley of Beautiful Girls as Bum translates to ‘Girl’ and Thang means ‘flat piece of land’.

These fertile valleys are covered in fields of buckwheat, rice and potatoes. Apple orchards and dairy farms are also common sights here. This serene region is one of the most peaceful places in the kingdom.

This dzongkhag is one of the most richly endowed districts in terms of historical and spiritual legacy. Some of Bhutan’s oldest and most venerated temples are found in Bumthang, including Jambey Lhakhang. According to legend, this ancient temple was built by the Tibetan king Songtsen Gampo in 659 A.D. as part of a chain of 108 simultaneously constructed temples in order to subdue an evil demoness that lay over the Himalayan region. It is the oldest Lhakhang in Bhutan.

There are numerous other temples and shrines worth visiting in Bumthang and many of them are linked to Guru Rinpoche’s visit in 746 A.D.

JAMBAY LHAKHANG FESTIVAL
Jambay Lhakhang is located in Bumthang and is situated on the way to the Kurjie Lhakhang. It’s a ten minutes drive to the temple from the Chamkhar town.
Jambay Lhakhang is one of the oldest temples in the kingdom. It was founded by, Songtsen Gampo, a Tibetan King in the 7th century AD. The king was destined to build 108 temples known as Thadhul- Yangdhul (temples on and across the border) in a day to subdue the demoness that was residing in the Himalayas. The temple is one of the two of the 108 built-in Bhutan. A second is located in Paro, the Kichu Lhakhang also built on the same day.

Legend has it that Guru Rimpoche visited the site several times and deemed it exceptionally sacred. Chakhar Gyab, the king of the Iron Castle of Bumthang renovated the temple in the 8th century AD.

The first king of Bhutan, Gongsa Ugyen Wangchuck constructed the Dus Kyi Khorlo (Kala Chakra- Wheel of Time) inside the temple, to commemorate his victory over his rivals Phuntsho Dorji of Punakha and Alu Dorji of Thimphu after the battle of Changlimithang in 1885. Later, Ashi Wangmo, the younger sister of the second king of Bhutan, built the Chorten Lhakhang.

The main relics include the future Buddha, Jowo Jampa (Maitreya) from whose name the present name of the temple is derived. The Lhakhang also houses more than one hundred statues of the gods of Kalachakra built by the first king, in 1887.

One of the most spectacular festivals in the country, called Jambay Lhakhang Drup is hosted here. The festival lasts for five days (check with your tour operator to confirm these dates). The highlight of the festival is the fire ritual that is held in the evening where crowds gather to witness the ritualistic naked dance.

JAKAR
This is a bustling little one-street town with an abundance of restaurants and handicrafts stores. Jakar sells a good amount of chugo, a hard, chewy dried cheese snack popular among Bhutanese. Internet cafes and the odd espresso bar have also started to make an appearance here.
The Jakar Dzong or the “Castle of the White Bird” dominates the Chamkhar valley and overlooks the town. Constructed in 1549, by the Tibetan Lam Nagi Wangchuk, the Dzong played an important role as the fortress of defence of the whole eastern Dzongkhags. It also became the seat of the first king of Bhutan.

A special feature of the Dzong is the approximately fifty-meter high Use or the Central tower, which is distinct from most other Dzongs in Bhutan. The other unique feature of the Dzong is a sheltered passage, with two parallel walls, interconnected by fortified towers, which gave the population of the fortress access to water in the case of a siege. The protected water supply is still intact to this day.

THE BURNING LAKE
Mebar Tsho – the Burning Lake
According to the legend, Terton Pema Lingpa had a vision of the sacred treasures that Guru Rimpoche had hidden within the lake centuries earlier. However, the people of Tang and the local ruler were cynical of his claims. In order to prove his claims, Pema Lingpa held a butter lamp in his hand as he jumped into the lake. After remaining under water for a long time he re-emerged holding a chest and a scroll of paper with the butter lamp held in his hand still burning bright. Thereafter, the lake came to be known as Mebartsho (the burning Lake).

The Burning Lake, Mebar Tsho is located along the way to the Tang village over the feeder road under Bumthang valley. It takes approximately thirty minutes to drive to the Mebar Tsho from Chamkhar town.

Mebar Tsho is considered one of the most sacred sites in the region as it is related to the renowned religious treasure reveler (Terton) Terton Pema Lingpa. Pema Lingpa is considered an incarnated disciple of Padmasambhava who discovered treasure within the lake in the late 15th century.

Today this small freshwater lake is a sacred pilgrimage site for the Bhutanese with bright multicoloured prayer flags surrounding it and a small altar dedicated to Terton Pema Lingpa has also been set up. On auspicious days people offer butter lamps at the lake. Many tourists visit the site to observe the spectacular beauty of this important historical and religious site.

URA YAKCHOE
Ura valley in Bumthang is known for the famous dance known as the Ura Yakchoe. The dance is performed during a festival that is held every May. During the festival, a sacred and important relic is put on display so that the people can receive blessings from it.
According to legend, an old woman sitting outside her house was visited by a lama asking for a drink of water. When she came out with the water, the lama had vanished leaving behind only a sack. Out of curiosity, she checked the bag and found the statue that is now displayed annually. This relic has been passed on from generation to generation and is still owned by the descendants of the woman.