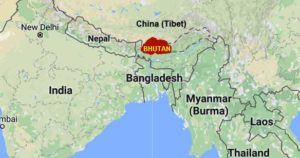 The Buddhist Kingdom of Bhutan lies along the lofty ridges of the eastern Himalayas, bordered by China (Tibet) to the north and northwest, and by the Indian states of Arunachal Pradesh, Assam, West Bengal and Sikkim on the east, south and west respectively.

With an area of 38,394 square km., Bhutan is comparable to Switzerland both in its size and topography.

The mighty Himalayas protected Bhutan from the rest of the world and left it blissfully untouched through the centuries. T

he Drukpa Kagyupa school of Mahayana Buddhism provided the essence of a rich culture and a fascinating history.

The Bhutanese people protected this sacred heritage and unique identity for centuries by choosing to remain shrouded in a jealously guarded isolation.

The kingdom is peopled sparsely, with a population approaching 552,996. Opened for tourism in 1974, after the coronation of the fourth King, His Majesty Jigme Singye Wangchuck, Bhutan is perhaps the world’s most exclusive tourist destination.

The country still retains all the charm of the old world, and travelers experience the full glory of this ancient land as embodied in the monastic fortresses, ancient temples, monasteries and stupas which dot the countryside, prayer flags fluttering above farmhouses and on the hillsides, lush forests, rushing glacial rivers, and – perhaps most important of all – the warm smiles and genuine friendliness of the people.

Each moment is special as one discovers a country, which its people have chosen to preserve in all its magical purity